Thank you for the music

At the start of lockdown, Gareth Malone started an online choir. Over 30,000 people would regularly join in at 5:30 every weekday. I was one of them.

Buy the EP from Decca

Over 3,000 of us joined a ‘Friends’ Facebook group. One suggested we send a ‘thank you’ song to Gareth, and it was decided to rewrite the lyrics to Abba’s Thank You For The Music to tell our story and include the song titles / warmups we’ve been working on.

I was one of the 40 lyricists. For example, I wrote the penultimate line: “Maybe we’ll meet one day in real life, instead of virtually”. I also trained the group admins how to use Zoom, and co-hosted rehearsals for up to 711 participants at a time.

And now we’re waiting for Gareth’s response, if any (he’s on holiday, so there’s no hurry).

Our custom lyrics (with my notes added):

We’re all at home and in fact it’s a bit of a bore
If we watch TV, we’ve probably seen it before
Then Esther asked Gareth to teach us to sing (1)
Great British Home Chorus became a real thing
We’re so grateful and proud
All we want is to sing it out loud

Now we are globally singing, it makes us all smile
Rehearsals can help us forget about life for a while
And now we’re a choir, together each day
Singing tongue twisters, sirens and ooh loo la lay (5)
From your swish garden shed (6)
You’ve taught songs till they’re stuck in our heads

Thank you for the music
The feels, the laughter (7)
We’ll remember ever after
There’s no doubt about it
Our choir keeps our hopes alive
Helps us survive
Thanks to you and to Decca, we’ll thrive
As we go somewhere only we know (8)
Each day at half past five (9)

We’ve been so lucky
Finding our voices, finding friends
We wanna sing it out to everybody
What a joy, what a life, what a chance

Thank you for the warmups, the notes we’re hitting
We’re still standing, we’re not quitting (10)
You have been our sunshine (11)
We say in all honesty
And thankfully
Because our world isn’t ordinary (12)
Maybe we’ll meet one day in real life
instead of virtually (13)
Meanwhile, it’s thank you for the music, from your GBHC

Gareth, we say thank you!

(5) More of our regular warmups

(6) Fortunately, Gareth had recently built a soundproofed music room at the end of his garden

(7) When singing something emotional, he’d experience “the feels”. And he’s very funny, so there was much laughter

(8) The EP includes our version of the Keane song ‘Somewhere Only We Know’ (it was my favourite). The lyric refers to YouTube

(9) For weeks, Gareth led the chorus at the same time every weekday, before changing to weekly on his own YouTube channel. He’s currently taking a well earned summer break with his family, and promises to be back in the autumn if the pandemic continues

(11) ‘You Are My Sunshine’ is the video being released tomorrow 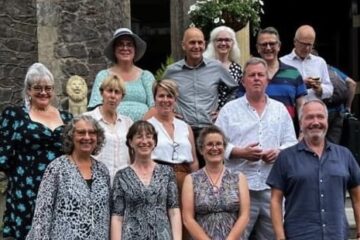 I was at a meeting of PSA Fellows yesterday, to hone our craft as professional speakers. We working on clarifying our takeaways (outcomes for clients), storytelling skills, and powerful opening statements for our talks and Read more…

Even after nearly 40 years as a copywriter, I still do CPD.

After months of working remotely, it was great to share a coffee with my fellow KoffeeKlatch Editorial Board members yesterday in Devizes. We made great progress towards simplifying the structure and content of the contracts Read more…